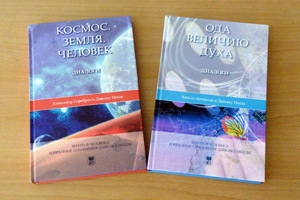 Believing in People: The Selected Works of Daisaku Ikeda, Volumes 2 & 3, of a Russian collection

MOSCOW, Russia: Moscow State University (MSU) Press recently released volumes two and three of Believing in People: The Selected Works of Daisaku Ikeda, a Russian collection of the author's works. In 2011, MSU Press embarked on the publication with the release of Moral Lessons of the Twentieth Century, a dialogue with former Soviet President Mikhail Gorbachev.

The two new volumes are both dialogues. The second volume, Uchu to chikyu to ningen (tentative translation: The Cosmos, Earth and Human Beings), is with Russian cosmonaut Alexander Serebrov. The third volume, Ode to the Grand Spirit, was co-authored with the Kyrgyz writer, the late Chingiz Aitmatov (1928-2008).

Dr. Serebrov, recognized by Guinness World Records for the numerous records he set as a cosmonaut, advocates viewing the issues that confront human beings from a cosmological perspective. He also promotes educational initiatives for young people on outer space and the environment. He and Mr. Ikeda first met in October 2000 and the Japanese edition of their dialogue was published in 2004, followed by the release of the Russian edition by MSU Press in 2006.

Mr. Aitmatov was a celebrated novelist who wrote in both Russian and his native Kyrgyz. His works include Jamilya, which has been described as "the most beautiful love story in the world." He first met Mr. Ikeda in 1988 while visiting Japan as an advocate and agent for perestroika.

Other Russian editions of Mr. Ikeda's works include a dialogue with MSU Rector Dr. Victor A. Sadovnichy and Choose Life with Dr. Arnold Toynbee.

MSU Press was established on May 8, 1756, and stands among the most prestigious publishers of literary and academic works in Russia.

[Adapted from articles in the April 7 and July 25, 2012, issues of the Seikyo Shimbun, Soka Gakkai, Japan]