On June 15, 2012, the Culture Ministry of the Republic of Armenia presented Daisaku Ikeda, SGI president, with its gold medal in recognition of his contributions to Armenian-Japanese friendship. The highest honor given by the ministry, the gold medal is awarded to individuals whose activities have been deemed to further the cause of culture and education on a global scale.

The presentation took place during the opening of "Dialogue with Nature," an exhibition of Mr. Ikeda's photographic works taken in Japan and during his trips abroad. It was held at the gallery of the Artists' Union of Armenia in Yerevan, the Armenian capital, and sponsored by the Artists' Union of Armenia and the Yerevan State Academy of Fine Arts. This was the 139th city and 41st country that has hosted the Dialogue with Nature exhibition. Guests included Armenian Culture Minister Hasmik Poghosyan, Vice Culture Minister Arev Samuelyan, Yerevan State Academy of Fine Arts Rector Aram Issabekyan and Artists' Union of Armenia President Karen Aghamyan.

In a citation, Vice Culture Minister Samuelyan portrayed Mr. Ikeda as an eminent philosopher, writer, poet, and a proponent of education, culture and social activism whose efforts span the world. He then praised Mr. Ikeda's longstanding contributions to cultural exchange between Armenia and Japan and welcomed the opening of the Dialogue with Nature exhibition held in commemoration of the 20th anniversary of the establishment of bilateral diplomatic ties. 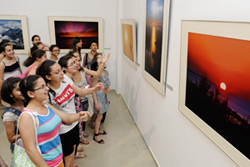 The Min-On Concert Association, founded by Mr. Ikeda, is currently sponsoring a Japan tour of the award-winning Armenian Little Singers choir, comprising gifted female music students in and around Yerevan City. Moreover, in the spring of 1997, the SGI sponsored a tour of "Children of the Caucasus Draw for Peace Against Violence and Wars" in Armenia, Georgia and Azerbaijan. The exhibition featured drawings and paintings by children in the Caucasus and was held with the aim of inspiring hope and goodwill in people who have long endured disputes and armed clashes in the region. The "World Boys and Girls Art Exhibition," featuring 400 artworks by children of 160 countries and territories, which the SGI cosponsored with UNESCO, also toured Armenia around that time.