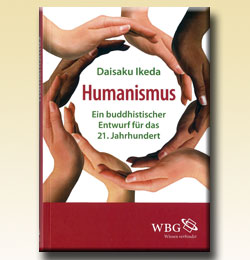 German edition of A New Humanism: The University Addresses of Daisaku Ikeda

BERLIN, Germany: Wissen verbindet (WBG), a publisher of academic books, has released a German edition of A New Humanism: The University Addresses of Daisaku Ikeda, which comprises 16 lectures including those he delivered at the Institut de France (1989) and Harvard University (1991 and 1993). The author offers insights that connect the philosophy and values of the Buddhist tradition with the legacy and future of the humanist tradition largely associated with the West. He also examines cultural and philosophical themes relevant to his particular audience in light of today's world and its challenges.

The German edition includes the poem, "May the Laurels of Kings Adorn Your Lives--To my beloved young friends in Germany," which Mr. Ikeda composed in 1991.

[Adapted from an article in the October 19, 2012, issue of the Seikyo Shimbun, Soka Gakkai, Japan]