Indonesian Edition of One by One: The World is Yours to Change Published 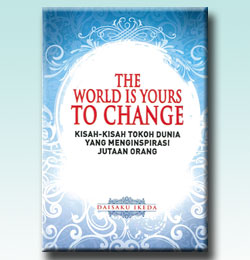 JAKARTA, Indonesia: On April 7, 2013, a book launch for the Indonesian edition of One by One: The World is Yours to Change was held by Ufuk Press. This book is a compilation of Daisaku Ikeda's essays on the lives of a series of diverse individuals and their extraordinary achievements. Ikeda introduces such people as Mahatma Gandhi and Rosa Parks, whose strength of character and ability to persevere have contributed to the advancement of peace.

In the foreword, the Indonesian Minister of Education and Culture Mohammad Nuh expressed his hope that the men and women introduced in this book would be a source of inspiration for all Indonesians to lead contributive lives. He also praised Mr. Ikeda's leadership in advancing interfaith dialogue.

The book launch was held at SGI-Indonesia's main community center in Jakarta. More than 650 people attended the launch including the Deputy Governor of Jakarta for Cultural and Tourism Affairs Sukesti Martono, and Dr. Bambang Wibawarta, dean of the faculty of humanities at the University of Indonesia.

The keynote speaker of the event was Yenny Wahid, director of the Wahid Institute. Ms. Wahid's father, Abdurrahman Wahid (1940−2009), served as President of Indonesia from 1999 to 2001 and published a dialogue with Mr. Ikeda titled Heiwa no tetsugaku, kanyou no chie (tentative translation: A Philosophy of Peace, the Wisdom of Tolerance). In her speech Ms. Wahid concluded: "This book teaches us that when a single individual acts with courage, they can transform their environment."

[Adapted from an article in the April 21, 2013, issue of the Seikyo Shimbun, Soka Gakkai, Japan]