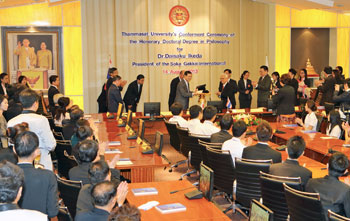 On August 14, 2013, Thammasat University in Thailand presented Daisaku Ikeda, SGI president and Soka University founder, with an honorary doctorate in philosophy in recognition of his contributions to cultural and educational exchanges between Thailand and Japan. The conferral took place on the Tha Phra Chan campus in Bangkok. SGI Vice President Hiromasa Ikeda, the SGI president's son, accepted the degree certificate and read an acceptance message on his father's behalf.

Established in 1934 with a focus on law and politics, Thammasat University is Thailand's second oldest institute of higher education. The university today enrolls over 30,000 students in some 240 academic programs in 23 faculties and colleges across four campuses. Many former prime ministers and political figures are among the alumni. Thammasat University and Soka University entered into an academic exchange agreement in 1985.

In a citation, Thammasat University Rector Somkit Lertpaithoon commended Mr. Ikeda for his promotion of peace, culture and education on a global scale, actions which, he said, were rooted in and reflective of the Lotus Sutra's teachings of respect for the sanctity of each individual's life. The rector called attention to Mr. Ikeda's contributions to Thailand, such as his promotion of educational exchanges and initiating through the Min-On Concert Association and the Tokyo Fuji Art Museum, of which he is founder, performances by various Thai cultural groups including the Royal Thai Classical Dance Troupe and the Thai Royal Ballet and special exhibitions and concerts highlighting His Majesty King Bhumibol Adulyadej of Thailand's photography, music compositions and paintings.

In his message, Mr. Ikeda applauded Thammasat University for being the first university in Thailand to institute a curriculum for training educators and offering evening classes. He also paid tribute to Thammasat University founder Dr. Pridi Banomyong, and his belief that the mission of a university founder lies in empowering people through education and promoting the ideals of democracy. He commented that August 14, the day of the conferral, was the anniversary of his first meeting with his mentor, second Soka Gakkai President Josei Toda, in 1947.

Mr. Ikeda expressed his heartfelt hope that the Thai university would foster a core of leading thinkers who would become the driving force for the ASEAN Economic Community (AEC), which will be launched in 2015. He resolved to contribute further to cultural and educational exchanges between Thailand and Japan, in consort with his fellow faculty members at Thammasat University. In closing, he conveyed his best wishes for the good health and long life of His Majesty King Bhumibol Adulyadej and the eternal glory and flourishing of the Kingdom of Thailand.

Also in attendance at the conferral were Professor Noranit Setabutr, president of the Thammasat University Council; Japanese Ambassador to Thailand Shigekazu Sato; Counsellor Shigeki Kobayashi of the Japan Embassy in Thailand (who is also director of the Japan Information Service); and SGI-Thailand representatives.

[Adapted from an article in the August 17, 2013, issue of the Seikyo Shimbun, Soka Gakkai, Japan]