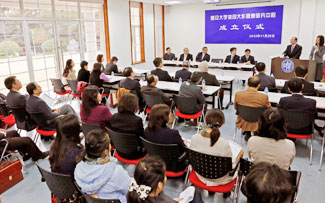 Fan Guorui, dean of East China Normal University's School of Education Science, asserted during his speech that Mr. Ikeda's educational philosophy of believing in and drawing forth the rich potential inherent in each individual's life, has illuminated a vital point much needed for educational reform today.

Dalian Art College presidential advisor Huang Jinsheng, who was also appointed director of the new center, shared that Mr. Ikeda has made great contributions to the establishment of Sino-Japanese diplomatic relations and friendship among ordinary citizens. He then expressed his determination to contribute to the development of artists with a global perspective and cultivate in the students the values required to live a noble way of life through the center's activities.

There are now over 30 centers in China focusing on research related to Mr. Ikeda's philosophy and thought.