Established in 1984, UAP describes one of its core objectives as fostering leaders who can contribute to the sustainability of the Bolivian Amazon. The university promotes training and research in natural resource management and biodiversity conservation of the Amazon. It has a student body of 3,800 students studying in 16 departments, which include information technology, agriculture, animal husbandry and natural sciences.

In the citation, UAP Rector Ludwing Reynaldo Arciénega Baptista welcomed Mr. Ikeda as a new member of the Bolivian university's faculty and paid him tribute for serving as an exemplar through his dedication to safeguarding humanity and leading a life of social contribution.

In a message read by a representative, Mr. Ikeda expressed his appreciation for the honor, which he said he shared with his fellow SGI members in Bolivia who have continued to contribute to their society and country as good citizens. He lauded UAP for its efforts to conserve the Amazon, which he called the wellspring of Earth's life force. He said that the promotion of sustainable development in the Amazon region encompasses the cultivation of cultural coexistence and a culture of peace and would open a future path for youth. He affirmed the SGI's creed of respect for the dignity of life and expressed his wish to help nurture many capable youth, together with his fellow members in Bolivia and the UAP faculty, who would contribute to the well-being of humanity. 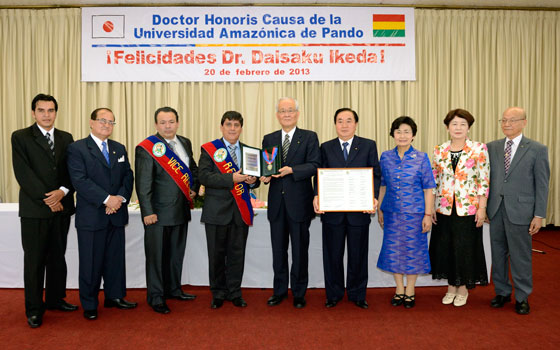 [Adapted from an article in the February 24, 2013, issue of the Seikyo Shimbun, Soka Gakkai, Japan]