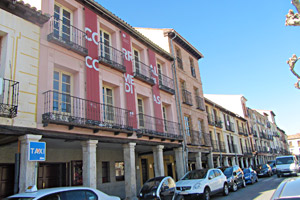 Corral de Comedias theater in Alcalá de Henares, Spain, was founded in 1602 as a courtyard amphitheater

SGI President Daisaku Ikeda's poems were among those presented at a poetry event at the Corral de Comedias theater in Alcalá de Henares, Spain, on February 6, 2013. Some 50 Japanese poetic works spanning the seventh to the twentieth century were read. University of Alcalá and SGI-Spain were among the sponsors of Poesía en el Corral (Poetry at the Corral), an annual poetry reading series organized by the Corral de Commedias theater.

Corral de Comedias theater, founded in 1602, is the oldest example of Spain's traditional theater-inns--courtyard amphitheaters that often covered a city block. The city of Alcalá de Henares, where the theater is located, was the birthplace of Spanish playwright, novelist and poet Miguel de Cervantes Saavedra (1547-1616), author of Don Quixote. 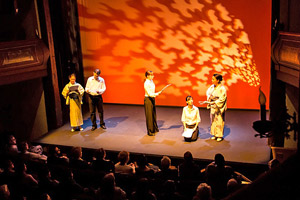 Professor Francisco Peña of the Philology Department at the University of Alcalá, one of the program directors, speaking to a capacity crowd of 200, conveyed his delight at the opportunity to present traditional Japanese-language poetry as well as the poetry of Daisaku Ikeda. He described the poetry of Mr. Ikeda, who was designated as Poet Laureate by the World Academy of Arts, India, in 1981, as having an inspirational energy for people struggling with difficulties of various kinds.

In the first part of the program, five representatives of SGI-Spain's Arts Department recited 11 poems by Mr. Ikeda in both Spanish and the original Japanese. These included "Spring Breezes," "Scattering Blossoms," "Night" and "The Universe." The second part of the program featured notable Japanese tanka and haiku poems composed over the past 14 centuries.

[Adapted from an article in the February 21, 2013, issue of the Seikyo Shimbun, Soka Gakkai, Japan]