On October 4, 2013, Aklan State University (ASU) in the Philippines presented Soka University founder Daisaku Ikeda with an Honorary Doctorate of Humanities for promoting education that encourages serving others and for his efforts to build a peaceful, harmonious and sustainable future. ASU President Danilo E. Abayon, Vice President for Academic Affairs Anna Mae C. Relingo and Board Secretary Michelle M. Tan traveled from the Philippines for the conferral by proxy held on the Soka University campus in Hachioji, Tokyo.

ASU began in 1917 as farming school, then developed into an agricultural college by 1992 before being elevated to the status of a state university in 2001. Its main campus in Banga, Aklan, consists of five faculties: the College of Agriculture, Forestry and Environmental Sciences, the School of Arts and Sciences, the School of Veterinary Medicine, the College of Teacher Education and the School of Management Sciences. Four other campuses are located in the municipalities of Kalibo, New Washington, Ibajay and Makato. ASU enrolls some 9,000 students.

In the citation, President Abayon acknowledged Mr. Ikeda for advocating dialogue as the foundation for peace, as well as for having established cultural, educational and peace research institutions dedicated to the welfare of citizens throughout the world. He said Mr. Ikeda was being commended by the Philippine University for his unwavering commitment, selfless service and achievements in advancing education.

In an acceptance message read by a representative, Mr. Ikeda said he hoped to share the accolade with friends engaged in farming and fishing the world over remarking, "farming, which discovers the immense capacity hidden within a grain of life and brings it to full flower, shares a deep resonance with education . . . a process in which seeds are sown in the hearts and minds of people, loving watered, nourished and painstakingly nurtured, an often underappreciated act of caring that requires extraordinary perseverance." Referring to the responsibility of graduates, he continued, "Cultivated from the great earth of their alma mater, the alumni in turn serve the school and forge new paths for those who graduate after them. I have always felt that these are the most sublime and enduring human bonds that education nurtures, and one of its most enduring and inspirational ideals." 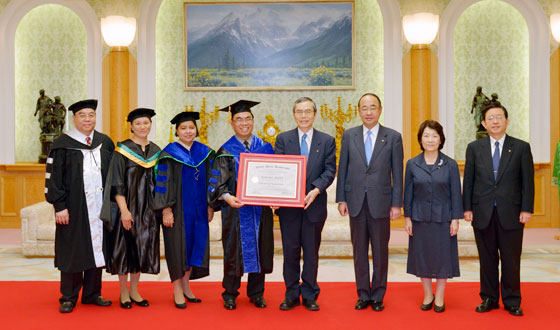 [Adapted from an article in the October 5, 2013, issue of the Seikyo Shimbun, Soka Gakkai, Japan]