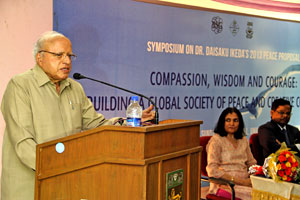 Bharat Soka Gakkai (BSG) hosted Peace Proposal symposiums in three major Indian cities--Mumbai, Chennai, and Kolkata--during the latter half of September 2013. The symposiums, all entitled "Compassion, Wisdom and Courage: Building a Global Society of Peace and Creative Coexistence," were based on Daisaku Ikeda's 2013 Peace Proposal addressing such topics as sustainable development and social equity issues.

The Mumbai symposium, held at the Nehru Centre on September 28, 2013, was co-organized with the Tata Institute of Social Sciences. One of the speakers at the event, Sheela Patel, founder and director of the Society for the Promotion of Area Resource Centres, drew on her work with marginalized groups such as homeless women and juvenile offenders in Mumbai to discuss the importance of compassion emphasized in Mr. Ikeda's proposal.

Dr. M. S. Swaminathan, chair of the M.S. Swaminathan Research Foundation and father of India's Green Revolution, was the keynote speaker at the Chennai symposium held at the University of Madras on September 29, 2013. In his speech, he concurred with Mr. Ikeda's suggestion of the setting up of a Social Protection Floor to help those in poverty. Dr. Swaminathan further noted, "More and more, the growing violence in the human heart is what we have to fight. That is what the Peace Proposal is all about--how do [we] fight the growing violence?" 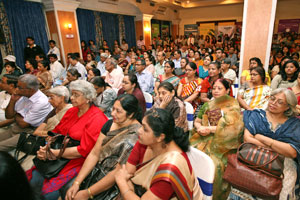 Audience at the symposium in Kolkata

The Kolkata symposium held on September 30, 2013, at the Saturday Club, featured keynote speaker Bharati Ray, a distinguished historian and former pro-vice chancellor of the University of Calcutta. Prof. Ray expressed her concern that the peace of our world being is being held hostage by greed, intolerance, indifference and inequality, and suggested that the way to counter this situation is through compassion, wisdom and courage. "We must all strive for creative existence, cultivate courage to stand for human rights and educate children and youth to be true global citizens," Prof. Ray emphasized in her keynote address.

Every year, since 1983 Daisaku Ikeda has published and submitted a Peace Proposal to the UN. Each proposal explores the interrelation between core Buddhist concepts and the diverse challenges global society faces in an effort to realize peace and human security.