Encountering the Poems of Daisaku Ikeda 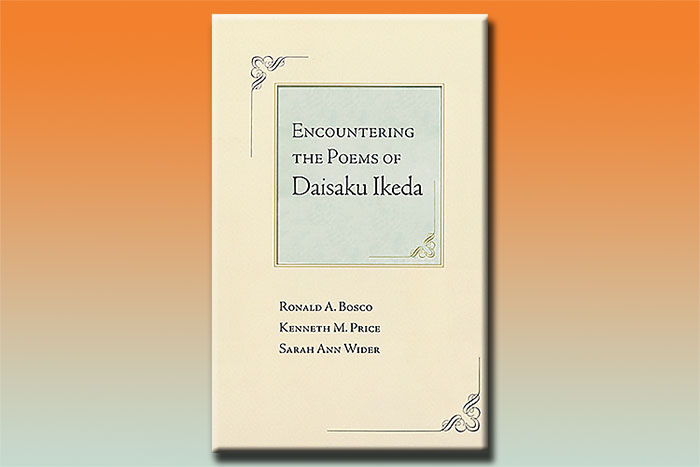 CAMBRIDGE, USA: Dialogue Path Press, the publishing arm of the Ikeda Center for Peace, Learning and Dialogue, based in Cambridge, Massachusetts, USA, recently released Encountering the Poems of Daisaku Ikeda. Literature scholars Ronald A. Bosco, Kenneth Price, and Sarah Ann Wider consider various dimensions of the poetic oeuvre of Buddhist thinker and leader Daisaku Ikeda. Dr. Bosco looks at lyricism in Mr. Ikeda’s work, Dr. Price traces the poetry’s connection with Walt Whitman, and Dr. Wider elucidates how the poems function as encouragement for their many readers worldwide. The three encounters are at once thoughtful and joyous.

Encountering is intended to be a companion volume for the 2014 collection of Daisaku Ikeda poems titled Journey of Life: Selected Poems of Daisaku Ikeda, published by I.B. Tauris.

"I believe that if a poet can perceive the infinite possibilities of humanity, his poetry naturally becomes a song in praise of humanity."

Ronald. A. Bosco is the Distinguished Research Professor of English and American Literature at the University at Albany, SUNY, where he has taught since 1975. Dr. Bosco recently served as the General Editor of the Collected Works of Ralph Waldo Emerson (Harvard University Press).

Kenneth M. Price, Hillegass University Professor of American Literature, co-directs the Center for Digital Research at the University of Nebraska-Lincoln. Since 2009, Dr. Price has co-directed The Walt Whitman Archive.

Sarah Ann Wider is Professor of English and Women's Studies at Colgate University, Hamilton, New York, where she specializes in the American Renaissance, feminist autobiographical and biographical writings, and contemporary Native American literature.

[Courtesy of the Ikeda Center for Peace, Learning, and Dialogue, April 30, 2015]