The Autonomous University of Beni "José Ballivián" (BAU) in the Plurinational State of Bolivia presented SGI President Daisaku Ikeda with the degree of Doctor, honoris causa, in recognition of his contributions to humanity and the advancement of peace, culture and education around the world. The ceremony was held at the SGI-Bolivia Culture Center in Santa Cruz on June 15, 2015, and was attended by BAU Rector Luis Carlos Zambrano Aguirre, BAU faculty and student representatives. SGI Vice President Hiromasa Ikeda accepted the award on behalf of his father.

Autonomous University of Beni is a national university founded on November 18, 1967, and carries the name of former Bolivian president, José Ballivián. With 15,000 students in eight faculties, the main campus of BAU is located in Trinidad, the capital of Beni in northern Bolivia.

In his congratulatory speech, Rector Zambrano said Mr. Ikeda is most deserving of this award and that there is no greater honor for the university than paying tribute to his accomplishments. In particular, Rector Zambrano noted Mr. Ikeda's principles for peace; his friendship and dialogue with people far and wide; his tireless efforts to advance culture, education and the arts; and his emphasis on fostering the youth who are the greatest treasures of this world.

In a message read by proxy, Mr. Ikeda expressed his joy in sharing this occasion with his beloved members of SGI-Bolivia. Referring to the sun depicted in the coat of arms of Beni, Mr. Ikeda stated that education is the sun that illuminates the future. "In the brilliance of the sun is the 'light' that pierces the darkness of uncertainty, the 'passion' that warms the lives of all living beings and the 'energy' to create the future of our planet earth." In conclusion, Mr. Ikeda shared his hopes to work together with the BAU faculty and students to generate powerful, indestructible energy with the invincible spirit of "perseverance" and "endurance" that Bolivians are known for and build a global society of peace and harmonious coexistence. 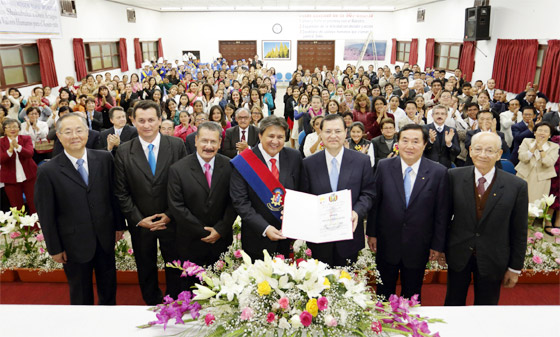 Commemorative photo at the conferral ceremony held at the SGI-Bolivia Culture Center on June 15, 2015

[Adapted from an article in the June 19, 2015, issue of the Seikyo Shimbun, Soka Gakkai, Japan]