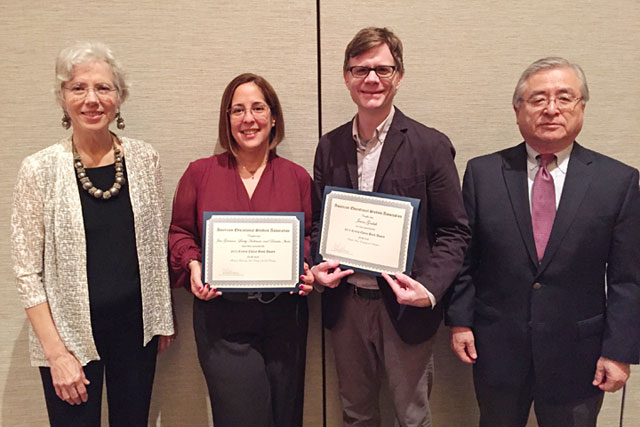 SAN ANTONIO, Texas: Living as Learning: John Dewey in the 21st Century, a dialogue among Dewey scholars Professors Jim Garrison and Larry Hickman and Daisaku Ikeda, received the 2015 Critics Choice Book Award from the American Educational Studies Association (AESA). Richard Yoshimachi, president and executive director of the Ikeda Center for Peace, Learning, and Dialogue, accepted the certificate at the awards ceremony on November 11 during the AESA annual conference in San Antonio, Texas (Nov.11–15, 2015).

The Critics Choice Book Award committee based its decision on the relevance of the dialogue to contemporary society, indicating that Living as Learning makes deep philosophical enquiry, navigating through topics such as: What is human nature? How do we distinguish between good and evil? What is a good life? And how do we foster global citizens in the 21st century who can contribute to a more humanistic society? These questions are pertinent to any creative democracy."

The same award was given to Daisaku Ikeda, Language and Education, edited by Jason Goulah, director of the Institute for Daisaku Ikeda Studies in Education at De Paul University. The book is a collection of chapters by international scholars, including De Paul professor Gonzalo Obelleiro and Institute doctoral assistant Nozomi Inukai, that examine Daisaku Ikeda's contributions to language theorizing and education. The award committee said the book "represents a significant step forward in our knowledge of an important contemporary Japanese educational philosopher and school system founder, Daisaku Ikeda, whose work has broad relevance to the field of education across many disciplines, including philosophy, language, curriculum studies, religion, peace studies, and cosmopolitanism. It is a timely addition to the scholarship in the emerging field of Ikeda Studies."

[Adapted from an article in the December 4, 2015, issue of the Seikyo Shimbun, Soka Gakkai, Japan, and from the Winter 2016 Newsletter of the Institute for Daisaku Ikeda Studies in Education]