The predecessor to CESVA was established by the Dom André Arcoverde Educational Foundation in 1967 with a primary focus on training educators. It later opened faculties in medicine, dentistry, law and economics, changing its name to Valença College of Higher Education in 1985. With the addition of schools of veterinary medicine, nursing and business management, the institution prepares many capable individuals in the field of medicine. CESVA is one of three educational institutions in the southern region of Rio de Janeiro to offer medical degrees.

Education Department Chair Almeida, who recommended Mr. Ikeda for the honorary doctorate, concurred with Mr. Ikeda’s conviction that education holds the key for transforming everything, including society and the environment. This resonates with the theme of our university, which is that education is the force for change, said Professor Almeida, and Mr. Ikeda has demonstrated how to put this belief into action.

In an acceptance message, Mr. Ikeda expressed his appreciation to CESVA Rector Pereira and the university for the honor and being able to share it with his fellow SGI members in Brazil. He stated that exactly 70 years ago on August 24, 1947, he had joined Soka Gakkai and commenced a journey for peace, together with second Soka Gakkai President Josei Toda, whom he had taken as his mentor. For this reason, he said, it was an honor and privilege to be able to dedicate this accolade to his teacher on this day. To commemorate the occasion and in tribute to CESVA’s legacy, Mr. Ikeda offered three guidelines to the youth of Brazil and other young global citizens who shoulder the future: be philosophers who create golden waves of dialogue; be leaders in society who remain steadfast in the face of crises; and work together to open new paths in community development. 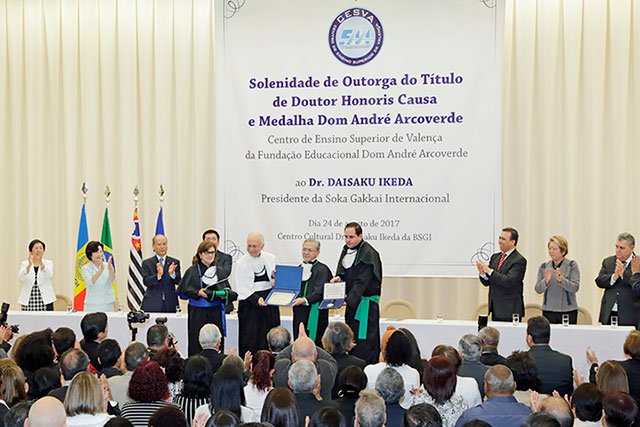 [Adapted from articles in the August 27, 2017 issue of the Seikyo Shimbun, Soka Gakkai, Japan]