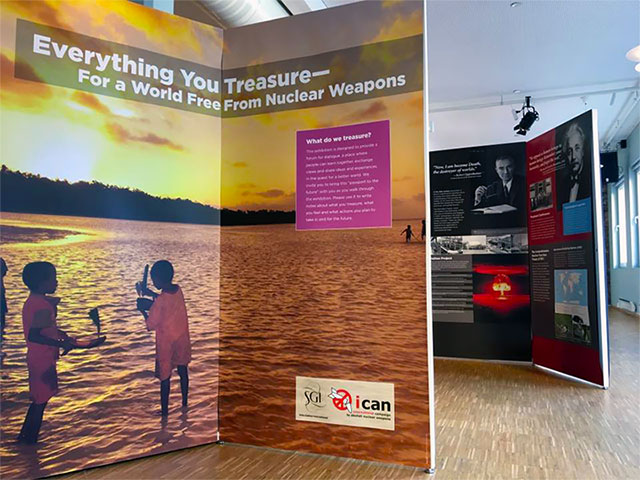 SGI collaborated with ICAN on the exhibition "Everything You Treasure—For a World Free From Nuclear Weapons," shown at an event in Bergen, Norway, in September 2016.

SGI President Daisaku Ikeda congratulated ICAN (the International Campaign to Abolish Nuclear Weapons) on being awarded the 2017 Nobel Peace Prize. He states, “This recognition is a source of profound encouragement to all who have been working for the elimination of nuclear weapons, in particular the hibakusha and the members of global civil society who share bonds of solidarity with them. .  .  . The conferral of the Nobel Peace Prize on ICAN is a cause for unmatched joy.”

Since the launch of ICAN in 2007, SGI has been proud to work as one of the movement’s international partners toward the realization of a world free from nuclear weapons.

In particular, SGI has collaborated with ICAN to produce education materials including “Testimonies of Hiroshima and Nagasaki: Women Speak Out for Peace,” a DVD set of short interviews with women hibakusha created in 2009, the awareness-raising exhibition “Everything You Treasure—For a World Free From Nuclear Weapons” (2012), which has been shown in 79 cities in 19 countries around the world, and in September this year in the production of a short anime film highlighting the importance of the Treaty to Prohibit Nuclear Weapons (See https://goo.gl/ouqidR).

SGI is committed to continuing the long struggle towards abolition of these most inhumane of weapons. Mr. Ikeda continues: “The adoption of the Treaty on the Prohibition of Nuclear Weapons and today’s award mark the opening of a new phase in the effort to abolish nuclear weapons, a rising tide of energy and commitment.” [Read full text.]

ICAN Executive Director Beatrice Fihn commented in an interview at the time of the adoption of the Treaty: “SGI has been one of our greatest partners in this fight. Faith-based perspectives are extremely important because there is a moral reason to why we are doing this.”

Soka Gakkai and the SGI have been working toward the abolition of nuclear weapons for 60 years, since the Declaration Calling for the Abolition of Nuclear Weapons issued by second Soka Gakkai President Josei Toda on September 8, 1957.