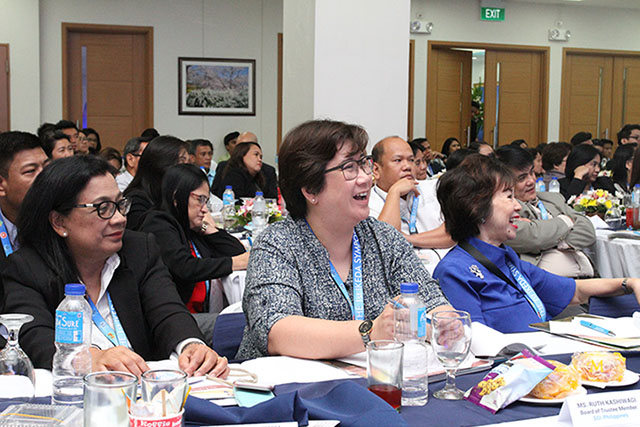 Some 300 scholars, researchers and students attend the 1st Ikeda Symposium in Manila

On February 24, 2018, the University of the East, Philippines, and Soka University, Japan, cosponsored the First Ikeda Symposium, “Harnessing the Values of Peace for Sustainable and Inclusive Growth,” at the Manila International Peace Center of SGI-Philippines. The event brought together some 300 scholars, researchers and students from 16 international and local institutes of higher education to engage in discourse toward the realization of the United Nations Sustainable Development Goals (SDGs) and the promotion of global peace and prosperity, based on SGI President Daisaku Ikeda’s philosophical ideals. Former Supreme Court of the Philippines Chief Justice Hilario G. Davide Jr., the guest of honor, gave an inaugural speech on “Peace: The Key to Full Human and Global Development, Progress, Security and Stability.”

In a message to the event, Mr. Ikeda said he had no doubt that the symposium, reflecting voices of youth from around the world, would prove fruitful in “discovering fresh pathways to the achievement of the SDGs,” whose targets include ending poverty and hunger and achieving a global society in which “no one is left behind.”

In his speech, Chief Justice Davide stated that while chaos and turbulence cast a shadow on our present world, the power and value of peace are the essential means for sustainable and comprehensive growth and finding solutions to global issues. He expressed his expectations for the participants, as protagonists of change, to explore viable solutions based on the intrinsic value of peace.

Following the four plenary speeches, four professors from the University of the East reviewed their contents and identified diverse themes for group discussions. University of the East President Ester A. Garcia said the symposium, with its animated discussions promoting peacebuilding, was extremely timely and effective. Participants engaged in a fruitful exchange of ideas for the spiritual enrichment and humanistic development of Philippine society and the global community at large.

[Adapted from an article in the February 27, 2018, issue of the Seikyo Shimbun, Soka Gakkai, Japan]