On January 25, 2018, University of Alcalá, Spain, presented Daisaku Ikeda, SGI president and Soka University founder, with an honorary doctorate of education, lauding his efforts to promote education and connect the world’s citizens through a culture of peace. He was one of three individuals to be honored by the university this year. The others were Juan Antonio Sagardoy, a retired professor of labor law who led the development and drafting of Spain’s Workers’ Statute in 1980, and Mario Docci, an architect and town planner specializing in urban and historic architectural restoration.

The city of Alcalá de Henares, home to the University of Alcalá, is situated near Madrid and is the birthplace of Miguel de Cervantes (1547–1616), author of the famous novel Don Quixote. The university traces its history to the founding of a medieval public institution of learning there in 1293, making it one of the longest standing European universities. Later, in 1499, Cardinal Jiménez de Cisneros expanded the institution, creating one of the world’s first examples of a model university town. The university was refounded in 1977, and it was designated as a UNESCO World Heritage Site together with the city of Alcalá de Henares in 1998. Approximately 30,000 students are enrolled on the university's three campuses.

In a citation, Professor Ana Belén García Valera of the Education Department commended Mr. Ikeda, who turned 90 earlier this year, for his lifetime dedication to fostering a culture of peace. “In an effort to eradicate the distrust that has been bred between peoples,” she said, “he has thrown himself into the task of citizen diplomacy, and while engaging in dialogue with thinkers in all fields of endeavor, working on his novel and writing essays, he has grappled to find solutions to global issues and has produced annual peace proposals appealing for the total elimination of nuclear weapons.” Professor Belén García remarked on Mr. Ikeda’s efforts to promote education for global citizenship that strengthens human-to-human bonds and fosters respect for diversity. She extolled his efforts to further these ideals by founding several institutions that serve to bridge cultures and build trust among diverse peoples.

In an acceptance message, Mr. Ikeda expressed his appreciation for the accolade, saying he accepted it on behalf of Soka education founder and first Soka Gakkai President Tsunesaburo Makiguchi, as well as the SGI members in 192 countries around the world who have inherited Makiguchi’s philosophy of peace and humanism. Just as a drop of water that merges with a mighty river comes to possess an eternal life, he said, young people who immerse themselves in the immortal wisdom of humanity become part of the mighty river of civilization, able to manifest infinite creative power of culture for the benefit of humanity. This, he said, is the sublime mission of the university. 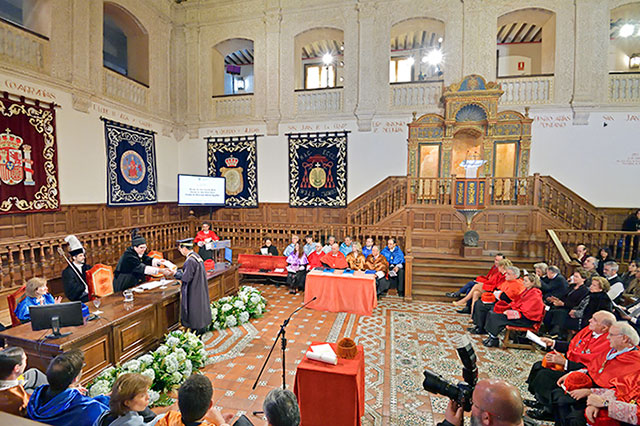 The conferral ceremony was held at the Paraninfo (Great Hall) on the University of Alcalá campus in Alcalá de Henares, Spain.

[Adapted from an article in the January 28, 2018, issue of the Seikyo Shimbun, Soka Gakkai, Japan]