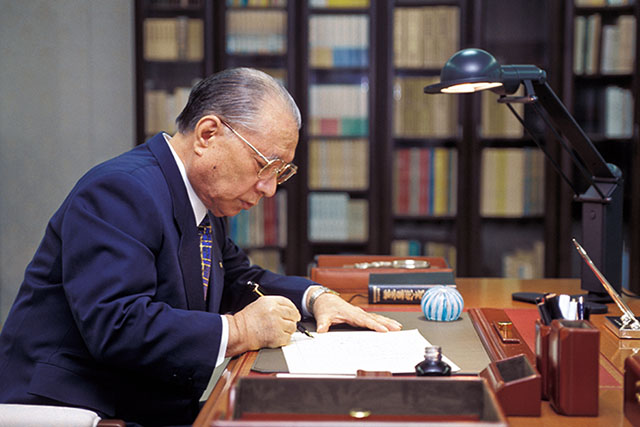 On January 26, 2018, Daisaku Ikeda issued his annual peace proposal, titled “Toward an Era of Human Rights: Building a People’s Movement.”

Mr. Ikeda welcomes the July 2017 adoption of the Treaty on the Prohibition of Nuclear Weapons (TPNW) as a turning point in the global history of efforts to achieve peace and disarmament, emphatic that while nuclear weapons exist, a world of peace and human rights will remain elusive. He outlines strategies for gaining support for the Treaty from the nuclear-weapon states and nuclear-dependent states.

In particular, Mr. Ikeda calls on Japan to declare its readiness to consider becoming party to the TPNW: “Having experienced the reality of nuclear weapons, Japan cannot turn away from its moral responsibility.” He asks us to never forget the spirit of the hibakusha—atomic bomb victims—who played a crucial role together with the International Campaign to Abolish Nuclear Weapons (ICAN) in the drafting and adoption of the Treaty—recognized by the award of the 2017 Nobel Peace Prize.

The main theme of this 36th proposal is that a human rights focused approach is key to resolving global issues, including the nuclear threat. In this year that marks the 70th anniversary of the Universal Declaration of Human Rights, Mr. Ikeda stresses the need to make the life and dignity of each individual our focal point—the fact that every human being is inherently precious and irreplaceable.

He cites the hibakusha and their determination that no one else should suffer what they have endured as exemplifying a foundational spirit for human rights. “The ideal of international human rights law is the quest to protect the life and dignity of each individual, a quest in which the continued pursuit of nuclear arms has no place.”

Mr. Ikeda highlights the power of human rights education in overcoming social divides, stating that its real significance lies in reviving our desire to perceive the common humanity of those different from us. He proposes that youth should be the focus for the fourth phase of the UN’s World Programme for Human Rights Education, beginning in 2020.

Running through the proposal is concern for the lives and human rights of refugees and migrants in the face of discrimination. Mr. Ikeda calls for focused efforts to ensure access to education for refugee and migrant children, especially those separated from their families.

Urging greater progress toward achievement of the 17 Sustainable Development Goals (SDGs), he proposes deepened cooperation between China and Japan in the form of a local government network for climate action.

Mr. Ikeda also identifies gender equality as essential to the SDGs, stating: “Gender equality and empowerment should not be regarded as just one element of the SDGs, but rather should be recognized as key to accelerating progress toward the achievement of the entire spectrum of goals.”

Finally, he calls for a UN international decade for the empowerment of women to run from 2020 to 2030, the target date for achievement of the SDGs.

His annual peace proposals are issued on January 26 to commemorate the founding of the SGI.

For full text of previous proposals, go to /sub/resources/works/props/.

[Adapted from a press release of the Soka Gakkai International Office of Public Information dated January 26, 2018]