The center’s aim is to research Mr. Ikeda’s philosophy and activities with regard to education, peace and human rights, and to promote further exchange between Brazil and Japan. The opening ceremony was held at the CESVA campus and was attended by Rector Antônio Celso Alves Pereira, Education Department Chair José Rogério Moura de Almeida Neto, SGI Latin America Executive Guidance Conference Chair Julio Kosaka, Brazil SGI General Director Miguel Shiratori and other representatives of CESVA and the SGI.

Furthermore, in commemoration of the 70th anniversary of the Universal Declaration of Human Rights, CESVA’s law faculty has established a course on Daisaku Ikeda’s perspectives on human rights.

Dr. Pereira expressed his joy at the center’s opening, remarking in his speech that “Dr. Ikeda is an exceptional individual who was born to dedicate his life to the great goal of peace for humanity. I am determined to spread Dr. Ikeda’s ideals of peace to the students and the community.” He also announced that a memorandum of understanding (MOU) had been signed between CESVA and Soka University of Japan enabling further exchanges between students and faculty members.

Dr. Pereira first met Soka University founder Ikeda in 1998 when as a rector of Rio de Janeiro State University he conferred an honorary doctorate upon Mr. Ikeda. He describes the encounter as an unforgettable memory. Dr. Pereira has since endeavored to promote Mr. Ikeda’s ideals of humanism, having delivered lectures at his university on Mr. Ikeda’s works and spoken about the importance of learning from his ideals and actions. It was during one such lecture that Education Department Chair Almeida learned about Mr. Ikeda and began reading his works, being especially impressed by his educational ideals. Based on Professor Almeida’s recommendation, in August 2017, CESVA presented an honorary doctorate to Mr. Ikeda. And this year, preparations to open a research center began, led by Dr. Pereira.

Dr. Pereira states, “The educational ideals of Dr. Ikeda completely match the philosophy upheld by CESVA. Through this center, which creates an environment to research and learn from Dr. Ikeda’s works, I believe that we can foster even more capable individuals who will contribute to the field of peace and humanism.” 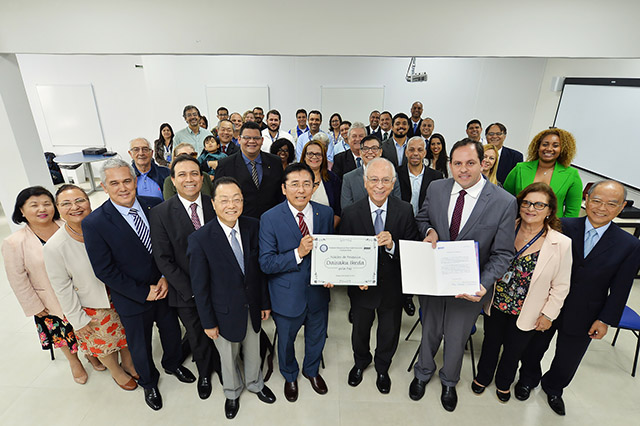 [Adapted from an article in the November 14, 2018, issue of the Seikyo Shimbun, Soka Gakkai, Japan]