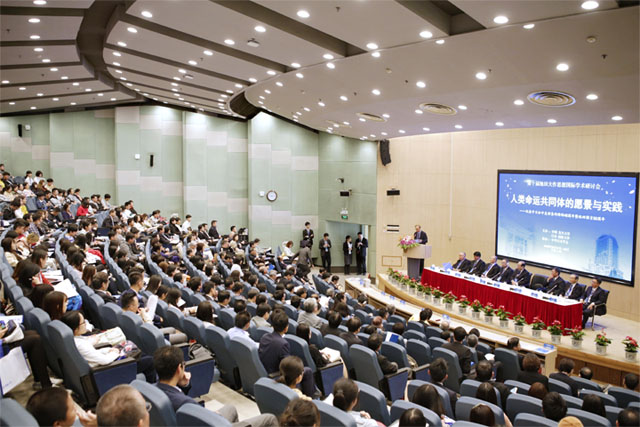 On October 27 and 28, 2018, Fudan University in Shanghai hosted the 10th International Academic Symposium on the Philosophy of Daisaku Ikeda. Titled “Vision and Action for a Human Community Sharing a Common Destiny,” the event was cosponsored by the host university and Soka University and supported by the Chinese Association for Japanese Studies. Some 160 scholars and students from 53 Chinese and overseas universities and research institutes participated.

In his opening address, Fudan University Vice President Zhen Zhimin expressed his pleasure in hosting the symposium in the milestone year of the 40th anniversary of the Sino-Japanese Treaty of Peace and Friendship and the 50th anniversary of Mr. Ikeda’s proposal calling for the normalization of relations between China and Japan. He expressed his hopes that the symposium would contribute to further strengthening friendship between the two countries.

Speaking on behalf of Soka University, Board of Trustees Chair Yasunori Tashiro reflected on the history of the symposium, noting that some 1,000 individuals have participated to date, contributing around 550 research papers.

In a message delivered in proxy by Soka University Professor Wang Hongxiang, Mr. Ikeda, the founder of Soka University, stated that the theme was timely and pertinent, as the global community grapples with escalating challenges including climate change, refugees and the nuclear threat. He described three key factors for heightening public awareness and understanding of humanity’s shared predicament: expanding humanistic education, promoting cultural exchange and solidarity among youth.

Professor Liu Yuhong, deputy director of the Institute of Japanese Studies at the Chinese Academy of Social Science, underscored the importance of strengthening cooperation within civil society toward a new phase in Sino-Japanese relations. China-Japan Friendship Association Vice President Xu Jinping introduced a message from President Li Xiaolin of the Chinese People's Association for Friendship with Foreign Countries, who conveyed his hope that the symposium participants work together to develop ideas for promoting Sino-Japanese friendship.

Following the final address of the opening ceremony by Shanghai International Studies University President Li Yansong, Chair Zhao Qizheng of the Committee of Foreign Affairs of the Chinese People's Political Consultative Conference and Soka University President Yoshihisa Baba delivered commemorative lectures. Mr. Zhao, referring to a recent survey among the Chinese people that showed a marked increase in favorable opinions of the Japanese, urged that the younger generation not forget the efforts of those who have struggled to bring down the walls of prejudice and helped develop bilateral relations.

After three keynote speeches, the participants broke into thematic discussion groups that continued into the second day. The symposium concluded with group representatives reporting on their discussions.

[Adapted from an article in the October 31, 2018, issue of the Seikyo Shimbun, Soka Gakkai, Japan]