A Conversation with My Wife

(From an essay published in the March 5, 2005, issue of the Seikyo Shimbun, the Soka Gakkai's daily newspaper1)

One morning, I heard my wife softly singing to herself--a song at once familiar and at the same time completely fresh to my ears:

"It's quite famous," she replied. It was "Flowers of the Field,"2 a beautiful melody that had been made popular by the Japanese husband-and-wife duo Da Capo.

"What a nice song," I said. "It captures the heroic spirit of ordinary people." Hearing it set me quietly contemplating.

"Flowers of the field"--the name of no specific flower is mentioned in the lyrics. This might be a good thing. Different people living in different places have different images of "flowers of the field." For instance, in Japan, we might picture cudweed, or cymbidium orchids, or violets, or field mustard blossoms, or lilies, or cosmos. 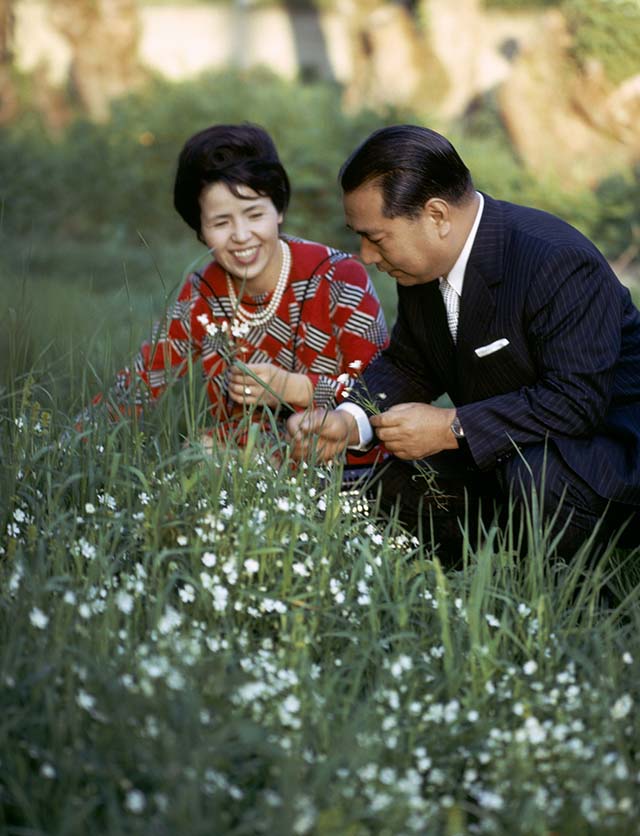 Ikeda and his wife Kaneko picking flowers alongside a road in Chez Denis during a trip to Europe (France, May 1975)

The north country is still under a deep blanket of snow. When the snow finally melts and the first shoots of Japanese butterbur and amur adonis begin to appear at the foot of the mountains, people's hearts will leap with joy, knowing that spring has come.

The Echizen daffodil grows even on the steep cliffs facing the pounding waves of the Japan Sea, enduring winter's fierce winds until spring arrives.

Hiroshima and Nagasaki were devastated by the atom bomb. People thought it would be decades before plant life could grow once more in its scorched earth. But oleanders quickly bloomed there again, bringing hope and courage to the survivors struggling to rebuild their lives.

I think we all have an image in our hearts of hardy flowers of the field blooming cheerfully, undaunted by wind or rain.

Whether noticed or not, these wildflowers, in the place where they have taken root, put forth stems, spread their leaves, and flower beautifully, each in their own distinct way. Some bloom by the wayside in such inconspicuous and incongruous places that they invite our astonishment and admiration for their strength and tenacity. I have frequently photographed such blossoms, pressing the shutter as a way of applauding their unheralded efforts.

"'Flowers of the Field'--why, it's the perfect anthem for the Soka Gakkai women's division," I commented.

Nodding in agreement, my wife said: "Yes. As a matter of fact, it was a women's division member from Meguro who told me about the song in a letter she sent me."

The woman, it turned out, was a member of the first graduating class of Kansai Soka Junior and Senior High Schools. She had been struggling hard, doing her best to care for a daughter afflicted with a chronic illness. She had been chanting earnestly and forging ahead valiantly, one day after another without rest or respite. Then she heard this song and began to sing it to herself:

Life is sometimes filled with hardships,
But rainy and cloudy days, too, are followed by sunshine,
That's when you appreciate
the dauntless spirit of flowers of the field.

"Dauntless spirit"--surely that is another way of describing courage. Life is a series of on-going challenges; it is a struggle to bring the flowers of happiness into bloom, regardless of the difficulties we may face along the way.

My wife, her eyes bright with emotion and her words full of praise and admiration, is always recounting to me the courageous struggles and noble victories of our women's and young women's division members in different parts of Japan and throughout the world.

Once during a visit to Hyogo Prefecture in the Kansai region, I shared a poem I had read in my childhood:

Trampled
and trampled again
still it blooms--
the smiling dandelion.3

This poem is a wonderful description of the many ordinary men and women who bravely live out their lives, a smile on their faces, no matter what hardship and adversity they encounter.

Why isn't the dandelion defeated by constant trampling? The key to its strength is its long and sturdy root, which extends deep into the earth. Dandelions may have a taproot more than one full meter in length.

The same principle applies to people. The true victors in life are those who, enduring repeated challenges and setbacks, have sent the roots of their being to such a depth that nothing can shake them. The German writer Schiller captured this image perfectly in The Maid of Orleans, his play about Joan of Arc, in the phrase: "O beauteous flower of victory!"4

Gaze down calmly
on washed--out pretenders,
and follow your own
flower--adorned path
without regret.

Wildflowers are neither vain nor haughty, neither jealous nor servile. Living in accord with their unique mission, characterizing the Buddhist principle of "cherry, peach, plum, and damson blossoms," they neither envy other flowers nor belittle themselves. They take pride in their identity, knowing that each is a flower with a bloom like no other.

Even the prettiest and most delicate wildflowers are by no means weak. They may seem fragile, but they are strong. They are not perturbed by rain or wind. Embodying the same indomitable spirit, our motto is "Nothing can defeat us!"

Our conversation that morning began with a song about flowers of the field.

"Another day of fresh challenges lies ahead of us, doesn't it?" my wife said.

"That's right!" I responded. "Let's keep working for the happiness and victory of ordinary people, who are the most precious of all!"

A smile blossomed on my wife's face like a lovely flower.

The flowers of the field, too,
rise up excitedly:
"Spring is here! Spring!"

2Japanese title “No ni Saku Hana no yo ni.” Lyrics by Masami Sugiyama and music by Ase Kobayashi. Released in 1983, it was the theme song of a popular Japanese television series.