City on the Water 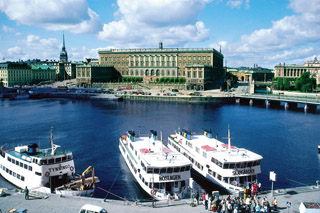 It was the season of white night in Stockholm, when sunlight bathes the city nearly 20 hours each day. The bright sky was often deceiving. Before we were aware of it, it was already nine or ten o'clock at night. The daylight of the northern sky--with its pristine clarity--enveloped the city and the people.

In the park, sunbathers cherished every minute of the short passing summer, and a father strolled with a toddler. In a narrow alley of the Old Town, some elderly people sat around a table, chatting and laughing. Everyone in this city seemed to enjoy life and living at his or her own pace.

In June 1989, I flew from England to Sweden. The capital, Stockholm, is often called the "Venice of the North." It is also known as the "City That Floats on the Water," and has a harbor that extends into its center. This city is built upon 14 islands linked by bridges, and is crisscrossed by canals. The water is so pristine that you can swim and fish in the middle of the city. Forests and lakes surround it, and the air is fragrant with the scent of pine trees.

During my stay in Stockholm, I made a courtesy call on Their Majesties King Carl XVI Gustav and Queen Silvia at the Royal Palace. They are a friendly, charming couple. The King is actively involved in environmental protection, and the Queen works hard for the sake of the disabled. Representing West Germany, Queen Silvia served as an official chief hostess on the Organizing Committee for the Munich Olympics in 1972, during which she met her husband, who was then Crown Prince. When their engagement was announced, they became internationally known as the "Olympic couple."

During our conversation, the queen shared her first impressions of Sweden. When she arrived there, she wondered why there seemed to be so many disabled people in the city. She later realized it was not that there were more disabled people living in Sweden, but that they were integrated into society, enjoying an active public life made possible through facilities such as movie theaters and restrooms that have been specially designed to be barrier free.

Often referred to as normalization, such efforts were rooted in the idea that everyone--regardless of personal challenges--has a right to live a normal life with others. Based on this philosophy, Sweden has been striving to help the elderly and the physically and mentally challenged to live and participate fully in society.

All people have difficulties of one kind or another. No disability should be looked upon as that person's fault or something to be ashamed of. Sweden directs her gentle gaze at humanity, always aiming to further improve society while questioning how to do so. The fearless Vikings used to set sail into uncharted seas. It is fitting that their descendants, the Swedes, have been leading a voyage of human progress by not waging war for nearly two centuries.

A well-known Japanese legend tells of a celestial maiden who, while bathing in the sea, has her feathered robe stolen. Though she is forced to marry the man who stole it, she eventually reclaims her robe and returns to her heavenly abode. There is a similar story about the origin of Stockholm:

One day a fisherman happened upon the area and had such good luck with his catch that he forgot to start for home. As a splendid moon shone in the night sky, he noticed a multitude of black spots moving in the tide. They were a school of seals. Moments later, the seals came ashore and transformed into indescribably beautiful young maidens--the legendary sea nymphs.

While the mermaids were dancing joyfully, the fisherman hid a sealskin he found lying nearby. When it was time to return to the water, one of the mermaids could not find her sealskin and started to weep and wail. The fisherman took her to his cottage and he and his mother treated her very kindly. She seemed to be happy with them and eventually agreed to marry the fisherman.

On their way to the wedding, the fisherman's boat came near the islet where he had won his bride. The fisherman could not stop smiling and told the bride about the sealskin he had hidden. "I don't know what you mean," said the bride. Pretending she had forgotten all about the stolen sealskin, she continued, "You must have had a strange dream last night."

Eager to prove his story, the fisherman stepped ashore and brought the sealskin out from under the rock where he had hidden it. The instant his bride set eyes on the sealskin, she grasped it and drew it over her head. She then flung herself into the sea and swam quickly away. The fisherman plunged into the water after her, but could not catch her.

When he saw he could not stop her, in his grief and frustration he seized his spear and hurled it. His aim was better than he had intended, however, for the poor mermaid gave a piercing shriek and disappeared into the depths.

The fisherman stood on the strand waiting for her to appear again. He saw the water around him, now stained with the mermaid's blood, begin to take on a soft sheen. As the crimson-hued water lapped the shores, flowers began to blossom and waft their fragrance. Since then, anyone seeing these shores has been drawn to this place, which eventually became the city of Stockholm.

Selma Lagerlöf recounts this legend in her book The Wonderful Adventures of Nils. Though an illness had rendered her partially lame, Lagerlöf soared high on her literary wings. She once wrote: "Merely to wish to see pretty things was not the true longing for spring. One ought to take up and kiss the first sod of grass that appeared above the snow. One should pick the first nettle-leaf merely to burn one's skin because it was now spring."

The winter of Northern Europe is long and harsh. Through it, however, the people nurture an indomitable will to wait for springtime and fully embrace it. They know that they can accomplish anything as long as they try, that they have the strength to change their lives as well as society. They shun expressions that ascribe things to fate or suggest that nothing can be done.

Stockholm in June was in full bloom with lilac. Countless clusters of purple flowers stood out gently under the turquoise sky, and innumerable heart-shaped lilac leaves seemed to embrace this northern capital with their warmth and vitality.