The Light and Splendor of Florence 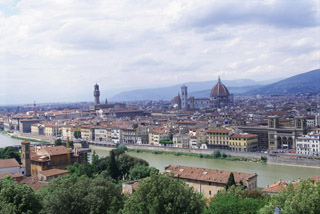 Florence, a city of flowers, showered in sunlight. The panorama from Michelangelo Square that day was like a famous painting, transcending time. The city itself is a living museum of art. Stone walls and reddish-brown roofs stand before beautifully rounded hills. Depending on the angle of sunlight, the town displays a subtle range of hues, from golden to lavender. It looks no different today than it did some 500 years ago, at the height of the Renaissance.

As you walk through the streets of Florence, you almost expect to see, stepping from the shadows, Dante, the divine poet; Leonardo da Vinci, the multi-skilled genius; or Michelangelo, the master artist.

Referring to Italy, Goethe, writer from the north, intoned with admiration, "Knowst thou the land of flowering lemon trees? / In leafage dark the golden orange glows." Geniuses, both famed and unknown, competed with one another in this sun-bathed, free city. And in this city, whose coat of arms is the proud lily, blossomed flower gardens of artistic beauty.

I visited Michelangelo Square in May 1994. It was the day after I had arrived in Italy, the country of light, from Germany, the land of Goethe, and had come to visit this green hill of which I held such fond memories. It was my third visit to the spot, the first being in 1981 and the second, in 1992.

In 1981, there had been only a handful of youth members in SGI-Italy, but now, their ranks had multiplied some fifty-fold. Their brilliant smiles, like blossoms of varying colors and shapes, shone with unique individuality. Youthful Italy! I was happy to witness their momentum in creating a second Renaissance, aimed at bringing about a springtime for humankind.

Renaissance means rebirth. It means a blossoming of life's innate dynamism that insures that "winter will always turn to spring." Before Italy's springtime, there was a succession of wars and conflicts, and the economy and government faced one crisis after another. Millions of people died from the plague. Visions of doom and hopelessness prevailed. But amid the darkness, people began to search the ancient texts for a glimmer of light, asking, "For what purpose am I living?" It was their inquiry into how to live that lead to a revival of art and literature.

At last, the people became joyfully aware that each human being constituted a miniature cosmos. The universe was itself an untiring creator; human beings, in like manner, were destined to expand their capacity without limit. There was nothing they could not accomplish if they wanted to. It was from this awakening that spring began to visit again and again.

Sandro Botticelli's famous painting "Primavera" (The Allegory of Spring) depicts the Roman goddess Flora, deity of flowering plants and symbol of Florence, wearing a crown of flowers and a floral wreath around her neck. Lovely flowers adorn her entire body. And the verdant surroundings where the goddess stands is abundant with flowers.

Roses, strawberries, English daisies, dianthuses, violets, forget-me-nots, bluebottles, anemones, hyacinths, dandelions . . . It is said that the painting depicts some 500 varieties of flowers that bloom in the fields around Florence.

"We shall each let our full potential blossom!"

The Renaissance man was not an aloof artist but an engaged artisan. He was always ready to roll up his sleeves and get to work. The city of Florence pulsated with the energy expressed in the spirit, "We'll do whatever it takes!" And from the muddy waters of difficult struggle, flowers bloomed.

If you approach the edge of Michelangelo Square you look down upon the Arno River. Its emerald waters flow calmly, reflecting the eternal sky.

Art lives long. Power is short-lived. The complex intrigue and cunning schemes of the past have been washed away by the river of time, and only culture, into which the people have put their heart and soul, remains, unaging and undying. A youth into which one has poured one's heart and soul never withers. Florence is a city of such immortal youth.